On any other day, getting out of bed to -10 degree weather would be hard, but when you have skiing to do, it is “hasta la vista bed”! The excitement kept me up all night so I was ready to wake up, put all on all of my super warm, puffy gear, and head to The Atrium restaurant at the Cliff Lodge for a quick bagel and coffee breakfast. The view from our breakfast table was breathtaking and we watched the pros ski down the black diamond slopes in front of us.

The ski rental, lift ticket, and locker area was right outside of our breakfast spot so I was quickly fitted for my ski gear and then we headed down the Chickadee slope to the Snowbird Ski School. This was my boyfriend Ryan’s first ski experience so we booked lessons for him – mainly because I wouldn’t hear the end of it if I taught him wrong and something happened. I was a little nervous about skiing at Snowbird for this first time since it is such a challenging mountain, but the instructors were awesome! The lessons were on a small slope next to the Chickadee run so I skied down Chickadee about 20 times while waiting. I probably should have adventured down to the other Snowbird slopes while Ryan was learning, but this was only my 3rd time skiing, so I wasn’t super comfortable wandering off alone. I still had a great time getting “back on the bike” though and could watch Ryan in his class periodically on the way down the hill.

One of the coolest things about the slopes at Snowbird are the lift passes. You just put them in your pocket and go through these scanners in line for the lift which automatically scan your pass and let you in. This made the process super quick and easy!

After about two hours, Ryan’s class was finally ready to take the lift up Chickadee to try their luck down a big slope. We got to the top and Ryan thought he was supposed to go for it, so he literally skied in a straight line, gaining lots of speed, down this pretty steep slope! I was skiing behind him yelling “fall over!” and, realizing the “pizza” breaking style wasn’t working for him, he watched someone else stop and mirrored them to slow himself. Phew! The exhilaration went to both of our heads and Ryan’s ski skills got better and better with ever run we did. 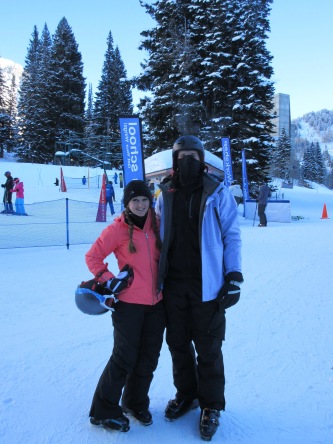 We were starving by lunch time and went to the Snowbird center for lunch at Tram Car Pizza. It was warm and delicious. I also un-buckled my ski boots and the feeling came back to my toes – yay! After rehydrating and readjusting my boots to keep the circulation flowing in my feet, we did a few more runs down the slope before heading back to the Cliff Lodge. The lodge is right off of the slope so we skied to the entrance, took off our gear, and walked inside to the hotel locker room. Our locker corresponded with our room number, which I totally forgot, so I accidentally put all of our stuff in someone else’s locker. Oops! Pro travel tip: put your room number in the Notes app of your phone so you can’t forget it!

A hot shower and a nap later, we were getting ready for New Years Eve! The Snowbird Center was having a parade and firework show so we got bundled up and walked down to watch. We nestled up next to a warm fire pit sitting under three giant, twinkle light covered fir trees. Little did we know, the parade was not an average parade! All of a sudden, people around us started pointing to the mountains where red flare lights started popping up! A procession line of about 200 night skiers with red flare lights on their poles started skiing in a snake-like line down the mountain. It was absolutely gorgeous. Immediately after they made it down, a fireworks show started. Not only were they some of the coolest fireworks I have ever seen with all of the different colors and patterns, but every time another one went off, it lit up the mountain-scape behind it with additional glitter off of the snow and ice. Stunningly romantic!

We waited by the fire for the crowds to disperse and then walked down to the first floor of the Snowbird Center to the Tram Club for some wine and live music before dinner. It had a great ski cabin vibe and the jazzy music was perfect. Literally three feet from the Tram Club door was the door to The Steak Pit, our dinner spot. I don’t know how, but we hadn’t thought of calling to make dinner reservations until the day we left, so naturally, everything was completely booked. Somehow, the hotel concierge got us into the Steak Pit for dinner at 8 o’clock sharp. With all of that said, we were expecting it to be a mad house, but strangely, only half of the tables were taken.

We scored a table right on the window with an enchanting snowy-forest view. A few of the trees had a fence around them with a sign saying that the fence protected the trees from the local porcupine named Larry. Despite looking the entire time we were at dinner, we never actually saw Larry, but he definitely caused amusement!

We started dinner with a lemon artichoke appetizer and a giant shared salad. Unfortunately, the food wasn’t presented well so I didn’t take any photos, but it was still delicious! For the main course, I had grilled rainbow trout with rice pilaf. We were super full after our entrees so we decided to forgo a big desert at the restaurant for some Junior Mints and gummy snacks from the Cliff Lodge store. We hopped in bed, surrounded by our snacks, and watched the NYC ball drop at 10 PM Utah time. While it was not the fanciest way to spend NYE, it was perfect for us, especially considering how exhausted we were after a long day of skiing.