I have always loved Greek and Roman history and mythology. I took multiple classes on the subjects in college, have watched almost every TV show and movie released along those themes, and went to Greece a few years back, so now was my time to visit one of the most well-known areas of Italy to see the ruin that Mount Vesuvius caused in Pompeii!

For those of you who don’t know, the volcano Mount Vesuvius erupted and completely destroyed the city of Pompeii in 79 AD. Under 13 – 20 feet of ash, most of the city was preserved and excavated, and you can see plaster moulds of the Pompeii citizens in the ash.

We woke up at 6 AM to have a carb heavy breakfast and hop on the bus for the 5 hour drive to the ruins. We slept, watched the Davinci Code, and observed the view of castles and farms in Limoncello country –  a delicious lemon liquor famous in the region. The lemons in the area were bigger than grapefruits!

Once we arrived at Pompeii, we grabbed some lunch in the market and shopped around before our tour. We were so relieved to find a place that had salads and fruit instead of bread and pasta to help digest everything. There was tons of volcanic rock to buy for souvenirs and pretty jewelry. One of the old gypsy ladies that was selling jewelry to one of my friends while eating rice and the rice was rocketing out of her mount between her missing teeth and hitting my friend. It was so gross but hilarious and I ended up buying a really pretty stone bracelet from her. Make sure you have a personal zone between you and these sweet old ladies just in case!

When the time came for the tour, we met our guide and walked through the turnstiles to the momentous place. I was in awe to finally be walking through a place I have been wanting to visit since my Latin class in 7th grade. There were tons of other people touring and getting around some of the larger tour groups while walking through the houses and bath houses was a little tough. I definitely recommend getting an early tour before the masses get there.

Dating back well before the destruction in 79 A.D., it was amazing to see that some of the frescos in the homes were still preserved and you could even see colors from the paint! There were pots, tables, and other objects preserved in the ash, but the most interesting were the moulds of people who were made during the excavation, Parents holding children, people crouched down, and even dogs… all having almost no time to react to Mount Vesuvius‘s wrath. 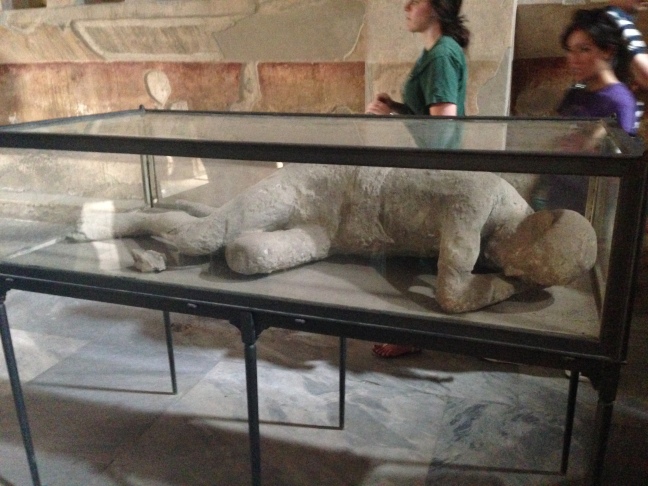 The bathhouse’s were also pretty cool. The engineering that went into making the steam rooms and hot baths vs. the cold pools was visible in the ruins and very interesting to learn about.

We toured up to Pompeii’s city center which had a fantastic view of the volcano. Note: even though other people might be doing it and there are no signs, do not climb on the ruins or else you will be chased down by angry site workers.