7 AM marked our arrival into Skagway. We were surrounded by snow-capped mountains in the inlet with beautiful aqua marine water below us. Ryan and I grabbed a quick bite to eat at the breakfast buffet of oatmeal, waffles, sausage, and fruit, and then we headed off the boat. The line to debark was long as there was a hold up with boat member dressed in really old / dirty bear costumes whom you had to take pictures with in order to debark. Seriously, the cruise hustles you for money at every turn!

We sneakily cut back, maneuvered around the bear photo line, and finally made it off the boat and onto shore. It was so windy and there was a low fog that blocked the sun of coming out. Apparently, all of the helicopter tours slated for the morning were canceled due to the weather! Thankfully for us, we had booked a hike and float tour and we were scheduled for pick up at 9:35 AM.

There is a shuttle from the ship yard into town for about $5, but with about an hour until pick-up, we walked the wharf trail to the town instead. It only took 10 minutes and was definitely worth doing! The town of Skagway is quite quaint, greeting the boat passengers with a big rail road train and statue of the founders in a well-kept garden area. Once passed the train, there are old buildings lining the gravel street dating back to the gold rush. We walked down Broadway (the main drag) and went into a historical salon that had been restored. We decided to save the gift shops for the afternoon, so we wandered the streets for about 30 minutes longer until it was time to turn back to the boat. 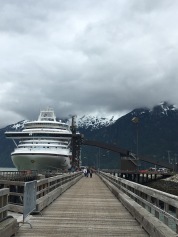 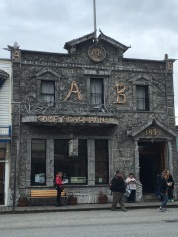 The wait for our transport seemed like it took forever as the wind whipped our hair around and made it much colder than inland. Eventually, two wilderness men showed up looking very mountaineer with a mixture of hiking sandals, big beards, and plaid. Sam and Rosco were to be our guides on our hike and float, and they quickly escorted us to “Kylo Ren”, the newest, all black van in their tour fleet. The guys both had quirky and hilarious personalities, telling corny jokes as we made our 40-minute journey through town and then the mountain side to our hiking spot. 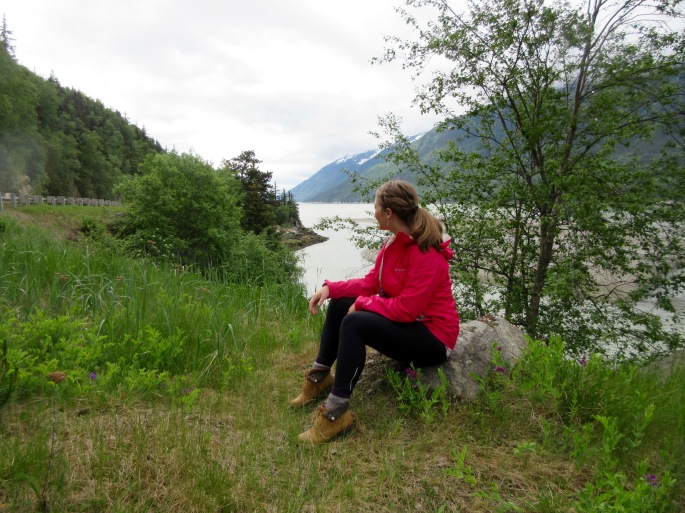 The view along the drive was spectacular. We followed the inlet into the mountain side during low tide and even saw a few bald eagles.

Sam was a funny type of informative, as many of his historical tid-bits got distracted by seeing his girlfriend biking on the side of the road or further improved upon with side stories from his own journeys. While he had a bit of a tough crowd in the 9 of his passengers, he definitely made for an entertaining guide with a great spirit! This continued as we started up the rainforest trail. We would stop to hear stories from travels around the world, or about Sam’s fascination with finding wild mushrooms and how some of his friends are convinced that, in order to find good mushrooms, you must leave “tokens” of important items in the forest for the gnomes and trolls that live there. 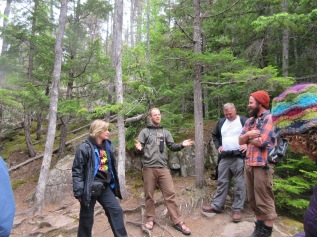 The trail through the forest was so lush. There was moss at every turn and giant trees that were so dense they blocked out the sun. Occasionally, we would have stumbled upon a little stream, or even bear claw markings on the trees that let other bears know how big and strong they were. One of the bear claw markings must have been 10 feet up on the tree that was marked upon!

The hike itself was not super strenuous, but that was mostly because we stopped often to chat. There were quite a few steep climbs up and down rock stairs, but our hike was nothing compared to the 33 mile trail the gold rush passers had to take with 100 lb. packs with all of their belongings with another 500 miles to go after they passed through Canada. Those people looking for gold must have been very determined to make such a trek!

We got to talking to our other guide Rosco and, as it turns out, he is a member of a well-known band called “Etcetera and So On” and he toured on Warped Tour and all over the world. He was in Alaska visiting / working for some friends at Skagway Brewery between tours. It was really interesting talking to him about his life, his travels, and his Shell Silverstine tattoos. You can meet some incredible people if you just put yourself out there and talk to strangers on your travels.

It took about an hour for us to make it to the river. There were wellies waiting for us to change into so that we could get in / out of the raft without getting completely soaked. We had to add a few layers on as well since the open water was much cooler than the hike in the forest. We hopped into the boat and took off. Captain Sam went bare foot and I couldn’t fathom how he wasn’t freezing! I guess you get adjusted to the cold just as you get adjusted to the heat. However, Sam did say that the wind chill in the winter of Skagway can get as cold as -40 degrees and I do not think anyone can get acclimated to that!

Anyways, the float down the river was so peaceful. Rosco took over the paddles and him and Sam traded off telling stories about their adventures going down 4 and 5 level rapids. Apparently, the trees that float down the river can get clumped up in certain areas and become very dangerous for those who fall off boats as they can get stuck easily within their branches and pushed under water. Our river was very calm with no rapids at all so our adrenalin only started pumping when our guide’s stories became intense. We saw a few more eagle nests and learned about the strength of the water and how it’s flow from the mountains changes and completely alters the landscape on a constant basis.

At the end of our very relaxing float, the guides had some snacks of Salmon, cheese, crackers, Oreos, and Capri Suns for us. We felt like we were back in grade school with that assortment of snacks, but it was so fulfilling after our trip!

Sam and Rosco drove us back to town and dropped us off at the Skagway Brewery. We heard so many good things about it, we had to try it! The place was packed but we got a table pretty quickly. Ryan got a flight of their beers and I had the Spruse Tip Ale. It was delicious! I also had some warm chilli and focaccia bread for lunch which warmed me right up after being cold for the better part of the day. It was so satisfying!

After lunch, we walked in and out of the dozens of souvenir shops. There was everything from art to jewelry, soaps to clothes, additional excursions to fun magnets. We opted for some Chia Tea lattes as a walking break and continued on to find something fun to buy for my mom. We had been walking for about ten minutes when I realized my backpack was not on my back – it was on the seat’s back at the coffee shop! Ahh! I sprinted through the hordes of tourists back to the coffee shop and to my relief, my backpack was right where I left it. *Phew!*

After that scare, we walked back past the train and the founder’s garden, and back to the ship. We were just in time for our 5:30 dinner, so we grabbed some wine from our room and met Ryan’s family at the dinner table. They had been on the rail road to White Pass and had nothing but good things to say about their day. For dinner, I had baked goat cheese to start, a lamb tartar, raspberry mint sorbet to cleanse the palate, pork tenderloin with various veggies for a main, spicy penne with mariana and a separate plate of scallops that the waiter brought out extra for us to try, and then we finished with vanilla ice-cream and green tea cookies. Again, so stuffed! The waiter took our empty wine glasses from our room, so I had to smuggle out our water glasses so we could refill our wine and bring it to the comedy show that was next on our agenda!

Carlos Oscar was the comedian for the night. He had a funny story about getting on the cruise. I was not super fond of his delivery as it was a bit all over the place, but he had some good punch lines and I laughed quite a bit. His show lasted about an hour until it was time to watch the sun set and go to bed.