6:15 AM wake up for our 7 AM arrival at the Ketchikan port. The city is absolutely charming with the different colored houses making their way up the mountains. Ketchikan is 3 miles long and only 3 blocks wide since the mountains make it difficult to build upon. Some of the “roads” with street signs are actually wooden stairs that lead up the the higher houses that cannot be accessed by traditional paved roads! 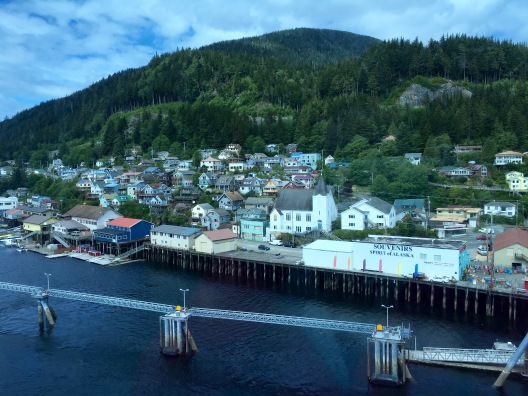 We got off the ship right at 7 AM and had about an hour to make our way to the Liquid Sun Gauge where we were to meet our kayaking guides. It was about a 10-minute walk down the dock to the gauge and we perused some stores along the way. One of the stores had a “Short cut to downtown” sign that pointed through its doors as you could walk through the store and out the other side. Talk about cute but effective ways to get people in your store! 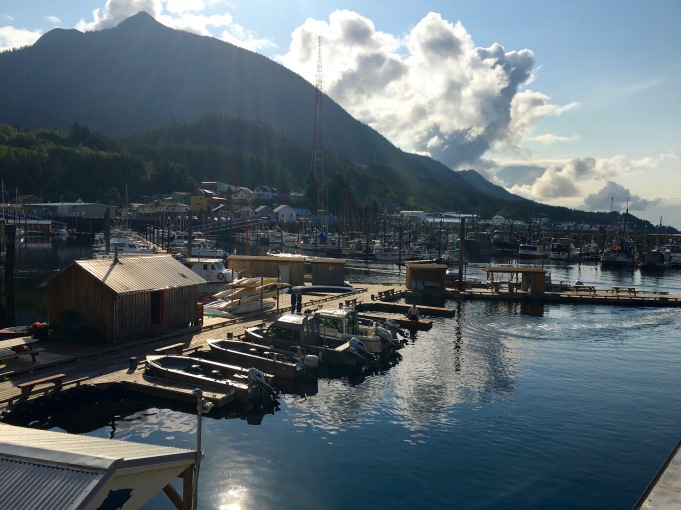 We arrived at the Liquid Sun Gauge which had Ketchikan factoids on it and showed how much rainfall the town has seen to date vs. its record of 202.55 inches in 1949. The above shows approximately 180 inches through May of 2016 alone! Next to the gauge is a huge bronze statue called “The Rock” portraying a native Ketchikan woman welcoming all of the traveler types that shaped the town (i.e. gold seekers, fisherman, tradesmen, loggers, and more). We waited by the statue until our guide arrived with a big yellow paddle. She escorted us, along with 6 others, further down the dock to Southeast Sea Kayak’s boat HQ. We got a brief safety instruction, dry bags for our valuables, and life vests. We then transferred to a smaller boat to drive about 20 minutes to Orca Cove. Our transport ship’s Captain was from Australia and was quirky and informative about much of Ketchikan. He told us of the natives and various islands where people live around the city. He also informed us that there was no whistling allowed on the ship. We still have no idea why he was so opposed to our tunes, but both Ryan and I got in trouble a few times for that one! 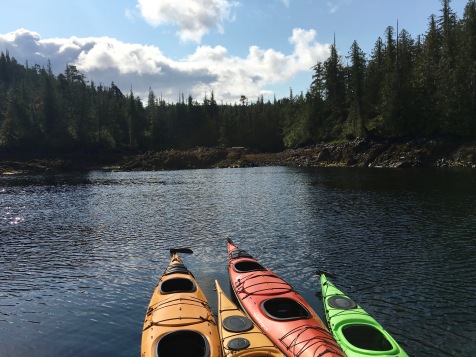 The view on the ride to Orca Cove was amazing. There was a larger boat waiting for us in the cove which had all of our kayaks attached. We hopped from our boat to the larger and got put into our two-person sea kayaks. Ryan was too big for our kayak so they had to remove our rudder controlling pegs so he could fit! We also had to wear these water skirt things that we wore like overalls and that covered the sitting hole so if any water came up onto our kayak, it wouldn’t go inside. The water was very calm, but the skirts were nice since they kept our stuff dry from water running off our paddles and kept the heat in so we were warm! 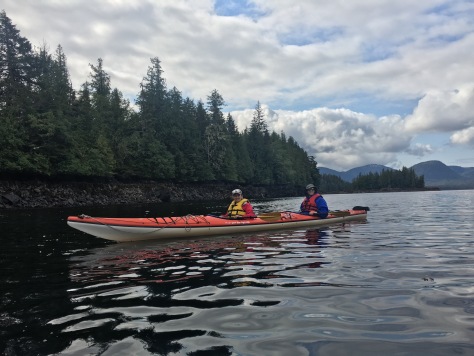 The tide was at its low point for the day and we paddled first to the rocky inlet of a salmon run stream. The tide was so low that all of the water from the stream was gone and we could not paddle up, but we were able to look down and see tons of sea life in the rocks since the water was crystal clear. We saw what must have been thousands of red or purple starfish all over the sea floor and exposed rocks that were waiting for the tide to come back in. There were also loads of anemone and sea cucumbers! The amount of life teaming below our little kayaks was amazing. 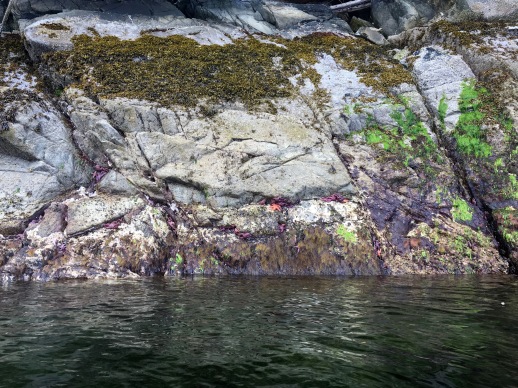 We continued to paddle along the shore line. There were only 6 of us, our guide, and the sounds of nature. We came across a rushing waterfall sourced from an inland freshwater lake and multiple eagles who were perched close to their nests where they mate for life and raise their young every year. At one point, two bald eagles took off from their tree and flew right over us to the neighboring island. It was incredible!

We kayaked for just about 2 hours. It was so relaxing and by far my favorite experience of the trip so far. Unfortunately, we did not see any whales or otters, but the scenery alone was enough to satisfy. We headed back to the kayak docking boat and chatted with the guys who captained the boat for a while about their travel stories and how they arrived in Alaska. Most of the workers we met were seasonal and just traveled the world for each regions various tourist seasons. What a life huh?

The owner of theSoutheast Sea Kayak makes his own smoked salmon which we got to snack on after our kayaking ride. With a little cream cheese and crackers, it was so yummy! Our boat back arrived just as we finished our snack and we hopped on to go back to shore. I was so sad our last Alaskan excursion was over, but there were still a few cruise days left!

It took about 20 minutes to get back to shore. We grabbed our stuff and browsed quite a few of the gift shops on the way back to the boat. I bought some smoked salmon for my folks as they love to have salmon on the bagels in the morning and where better to buy smoked salmon than the salmon capital of the world!?

Our ship departed from Ketchikan at 1:15 PM. We had “A Taste of India” for lunch and I was surprised at how good the ships take on Indian food was. It wasn’t the best ever, but it was not disappointing either! After that, we hopped into our bathing suits and into a hot tub on deck 15. We were having a nice time and I was stretching my IT bands in the hot tub since they were a bit sore. With one foot out of the water, I looked up and saw this 40ish year old guy in a bright red jacket with fanny pack take my picture, smile, and wave at me! Then he turned around and walked off. It was so weird and creepy – I guess he really liked my feet?!

We didn’t stay in the tub too much longer after foot guy before we had to run back to the room and get ready for formal night! I wore a blue cocktail dress and Ryan matched me with a navy bow tie. We did a little pre-gaming at the buy one get one for $1 drink event at the Wheelhouse bar – a great way to have some strong and cheap cocktails if you do not have a cruise drink package. We then continued our party in the Botticelli dining room and had quite the feast or lamb and veal pate, beef Wellington and smashed potatoes, and baked apple cake with vanilla ice-cream.
After dinner, Ryan and I grabbed the bottle of wine from our room and headed to Disney trivia in another bar. While Ryan’s sister and her husband knew almost all of the answers, Ryan and I were pretty poor Dinsey fans. The girl hosting the trivia used to work at Disney and her questions were very detailed! We opted for trying our luck in the couples “how well do you know each other” game after trivia, but we got turned away since Ryan and I are not yet married – boo! After being rejected, we decided to head back to the room to watch movies and sleep off our wine!