2017 arrived with excitement as we looked forward to our final day of skiing. After another early breakfast and drive to Taos Ski Valley, we hit the basically empty ski slopes as the other skiers (presumably) were recovering from their NYE festivities. Not only were the slopes empty, but they were full of fresh snow from the storm that started the night prior and lingered into the morning. Thank gosh for that fresh snow – it felt like a pillow as I crash landed from my new ski confidence’s drive to try a jump or two. Day three was much more about having fun and play around more than anything else. We even tried a black slope and didn’t die! 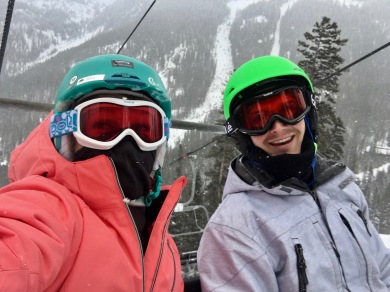 We took a few snack and water breaks throughout the day, and eventually called it quits around 2. I couldn’t believe out ski time in Taos went by so quickly! I was so sad to return my gear to Cottam’s Ski Shop, since it meant we were done for this trip, but was still elated from the day’s runs.

There was a cute little town about half-way back to downtown Taos. We decided to make a pit stop and peruse some of the shops there. There was a pottery gallery with some amazing pieces that we stopped in. The girl working there was very nice and showed us the back room where the owner and some of the artists made the work shown in the gallery. In our typical tradition of buying art or something useful on our trips, instead a cheesy trinket that gets thrown in the “stuff pile”, we decided to buy some pottery from the gallery. We got a large serving bowl and two small bowls to match for a very reasonable price. 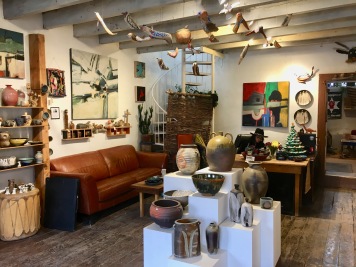 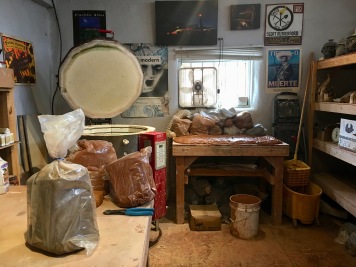 With our purchase in-hand and no walkable lunch places in sight, we jumped in the car to head to a Mexican restaurant called Orlando’s for a bite to eat. Orlando’s had been recommended to us by 4 -5 different people in the past few days and we quickly found out why. The resultant was well decorated, quick, friendly, and had great food. I had a tasty chicken taco salad and Ryan had a sampling of three types of enchiladas. We sat in front of the kitchen and watched the quick and efficient way the staff was pumping our orders – it was very impressive considering the small space that they were working in.

After lunch, we drove into town to the main square to walk the galleries and shops. The square was small and the garden area was packed with fences, trees, and tents that did not make it very attractive. The trees were lined with twinkle lights which were nice but the colors were random so it was not very clean-looking. We went into quite a few Taos-themed gift shops, galleries, and clothes places. It was hard not to compare the town square to that of Santa Fe’s which I preferred. Santa Fe’s square was cleaner, more planned out, and had many more unique stores organized around a square block so it was easy to find the next place to explore. Taos was more spread out and you had to walk down random alleyways to find new areas of shops to explore. Also, the restaurants and bars in Taos were spread along the main road in downtown, so there were not as many walkable options from the square. We explored for about an hour before deciding to go back to the hotel, hang out with Dakota, and power-nap before heading back out for the evening. 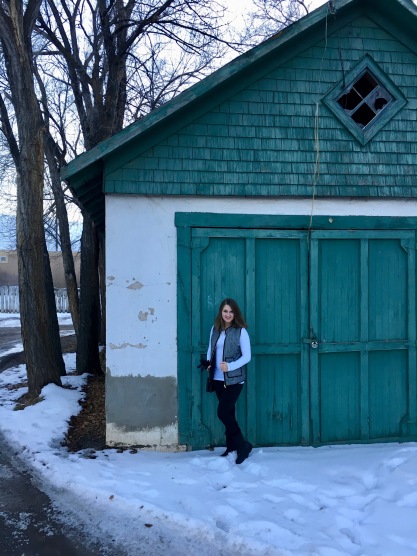 Everywhere I looked said that same thing – the best resultant in Taos is Love Apple. I tried get a reservation but Love Apple was totally booked Friday and Saturday night and only had 9:30 PM or waiting list spots on Sunday. Since we had a big late lunch, 9:30 PM didn’t sound so bad for dinner, so we decided to wait it out. After our nap, we went to the Taos Mesa Brewery’s tap room for a drink before dinner. It was about a mile up the road from our hotel and was in a really cool building with both indoor and outside seating. We sat at the bar and chatted with the bartenders about beer, football, and Taos skiing. The Taos Mesa Brewery was actually located a quick drive outside of Taos so we were at their downtown bar, but the quality of the beer was amazing. Ryan loved it so much he bought a growler of beer and it was so much cheaper than beer in Dallas.

Ryan was getting really hungry and kept hinting that he wanted the pizza at the brewery over going to Love Apple. Fortunately, I held off from succumbing to that temptation just long enough for Love Apple to call and tell us our table was ready an hour early! We quickly finished our drinks and drove over to the white pueblo styled building which housed Love Apple. We walked into a small entry way, through some dramatic curtains, past the kitchen, and into the dining room. Walking through the curtains, seeing the bustle of the kitchen, and then through another set of curtains into the candle lite dining room immediately put you into a romantic, secret garden, type of mood. The dining room itself was mainly lit by candle and twinkle lights which were further reflected by mirrors along the walls, setting the romantic mood in full swing. We sat at a little table and couldn’t help but know the meal to come was going to be an amazing experience. 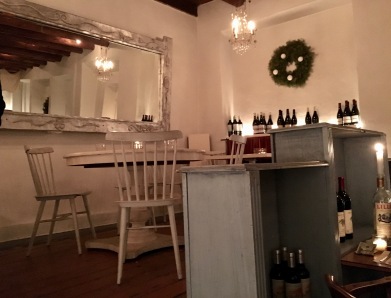 We started our dinner with two flavors of cornbread muffins, traditional and blue corn. My were they fluffy, moist and delicious, especially with the two flavored butter options to spread across each delicious bite! Yum, yum, yum! 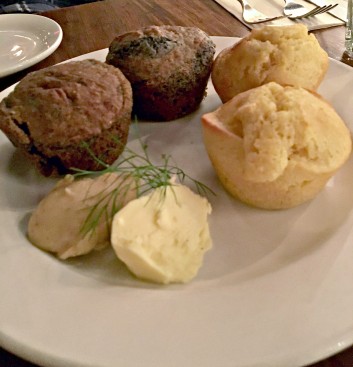 Up next was a pomegranate, walnut, and locally sourced goat cheese salad. The vinaigrette went perfectly with the other ingredients. The salad was the perfect size to split since we were already somewhat filed by the muffins.

As soon as our salads we done, our main entrées hit the table. Ryan swears that his trout was one of the best things he has even eaten – a very bold statement considering all of our culinary adventures, but I would have to agree that the meal was top-notch! I greatly enjoyed a perfectly cooked quail with feta and pomegranate quinoa. The quail was crispy, delicious, and the perfect size. 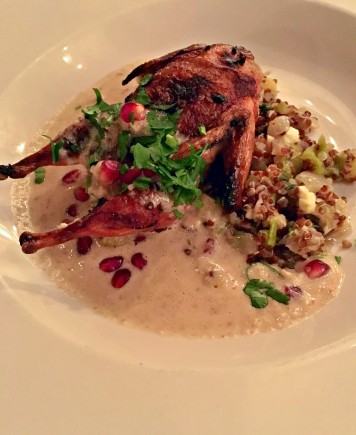 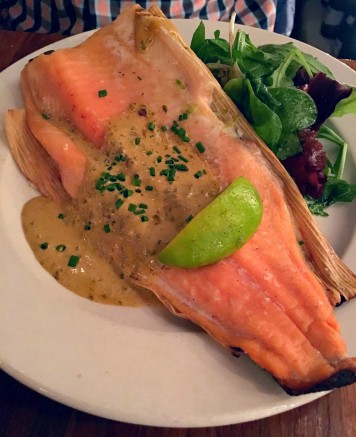 We were not originally going to splurge for desert, but considering the caliber of our meal so far and the fact that the apple cobbler sounded irresistible, we went all in. The cobbler had caramelized apple, a crispy and buttery crust, and was topped with cinnamon ice cream. My taste buds were in heaven and my stomach was about to burst, but it was worth every bite!

I highly recommend checking out Love Apple if you go to Taos. The only suggestion I would make is that you order your courses as each previous course comes out or ask your waiter to take it slow. Our food came out at very rapid rate, so we rushed through our dinner. Taking it slow will ensure you can relax and savor each course and make your fabulous night last a little longer.

Highly satisfied from dinner, we drove back to the Inn, lit the fire in our room, and listened to its crackle as we fell asleep.

Checking out #castles & eating some delicious Kobe beef was the perfect start to our #osaka stay! ⛩🥩 If you haven’t heard of #yakiniku, it’s grilled bbq where you get raw meat & grill it at the table. We went to a place where it was literally all you can eat premium cuts & seafood for 1.5 hours. We were soooo full after but it was absolutely delicious- thank goodness for 25k step days to walk it all off. Check out the rest of the day on the blog now! (Link in bio, obviously 😂)
When your taking a photo & your moms like “oh I like this spot too.. selfie time!” She’s a keeper 😂😂 #Ps- a new #japan post is on the blog now!
It’s all about the climb, right?! ... (that & not falling!😂) Enjoying the journey (through cacti pricks, leg cramps, & all) was my mantra during the hike up Lost Pine Trail. The #Texas view from the top was pretty spectacular too.
Who said yo girl can’t handle a little mud? (It’s exfoliating right?!) Despite literally pulling my other half down the Rio Grande & falling hip deep into the mud, we couldn’t have had a better time #kayaking in #bigbendnationalpark ! Read all about it & our time in Marfa on the blog tomorrow!
180 feet below the surface have been any more surprisingly beautiful. #Arizona certainly has some hidden gems! Who knew sand could be so colorful. (Also glad we didn’t get stuck or flooded out!)
Welcoming my next trip (tomorrow!) with open arms! Off to #arizona for our annual #sistertrip 👯‍♀️... stay tuned for some more kayaking, canyons, & craziness!
Follow The Impatient Traveler on WordPress.com