5:45 AM and I was awake. After a great night at the Mari village, I thought I would at least sleep until 7 but, nope! I needed to catch up on blogging so I typed away while Ryan made coffee and toast for breakfast. We tried to watch the sunrise over lake Taupo but it was in the wrong direction – ooops!

Before we knew it, we were packed up and ready to head to the Waimangu Volcanic Rift Valley for our volcanic activity experience! There are two other famous and big volcanic areas you can go in Rotorua, but all of the reviews I read said they were super packed and touristy. We passed both of the other places on our way to Waimangu and they looked more like amusement parks than nature reserves. We were the only car in the parking lot for our Valley walk! Waimangu is a national park with trails through the volcanic valley with no lines or tourist expectations!

We checked in, grabbed a map that outlined the various points of interest along the trail, and took off on our two-hour walk. The trail was hilly but not hard by any means, and we were full of anticipation that kept growing as we saw more and more steam coming out of the forest!

We came across the first big site within minutes. A massive lake with bubbling water and steam everywhere! Frying Pan Lake’s temperature averages 131 degrees fahrenheit! Wouldn’t want to go for a swim in there…

The sulfur smell was almost non-existent, but you could feel the heat from the steam. There was even steam coming out of small holes in the rock formations along the path.

We were totally in awe of the natural formations, spouts, and water colors from the volcanic activity and were loving every second of the unique area.

Apparently, none of this existed before 1886. That year, Mount Tarawera erupted and created huge craters in the ground that, over time, filled with water and became the volcanic lakes we see today. We ended up taking the “extended” trail that led up, up, and away to some awesome views of the lake.

We only ran into one other group the entire time we were on the trail. The secluded nature of our hike made it that much more special.

Eventually, we got to the end of the trail and had to wait 30 minutes for the shuttle to arrive. We snacked on Quest Bars and apples to refuel and watched the black swans dive to get food in the lake. They were so funny because they only dove with their heads, so their butts and legs flailed above the water while they were submerged. So funny to watch!

The bus finally came and we were back to the reception area and into the car in no time. We had about 40 minutes of driving to do before we hit our next stop, Huka Falls. After Marokopa Falls in the day prior and our experience at Krkra Falls in Croatia, we were anticipating a great sight since Huka Falls is so much more well-known. We were slightly disappointed. Huka Falls were really more like really blue rapids. The force of the rapids was pretty astonishing, but it was crowded and we like Marokopa much more.

It took about 10 minutes to see Huka Falls, so we jumped back in the car and sought out a lake-side lunch spot on Lake Topau. We found a cute little place with a great patio and enjoyed some fish and chips and a lamb salad. Little did we know that we were actually visiting over Anzac Day so all of the patios were packed on the national holiday. Anzac day is Australia and New Zealand’s version of Veteran’s Day in the States. We saw a ton of people in their military / service uniforms.

After we filled up on lunch, we had another hour and a bit drive to the Tongariro Suites @ The Rocks. The drive was beautiful and went by quickly. I even made friends with some sheep!

We were in the middle of no where and almost missed the hotel since it’s street was so off the beaten path. Once we pulled up, we knew we made the right choice! The Suites used to be a cow paddock and a fantastically nice couple turned it into a luxury resort with about 5 suites. It is all solar power operated and totally luxurious down to the tiniest detail! Because the Tongaririo Alpine Crossing hike starts so early, The Suites already had the breakfast buffet set up in our room! 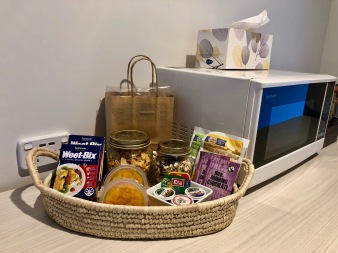 The beds had heating pads, the bathroom was super luxurious with heat lamps for extra warmth and the owner even made a Canadian hot tub from cedar wood for the guests to recover in. The list of amenities and thought put into this place goes on and on and we couldn’t get over our view of the moon rising over the mountain peaks….

The owner recommended a restaurant called The Cyprus Tree for a tasty dinner within a quick drive. You would think, in such a remote area, the food would be average, but you would also be thinking wrong! We split a delicious beet, balsamic, and goat cheese ball salad, lamb sliders (that were to-die for), and cranberry walnut stuffed chicken with risotto. YUM!

After we got over our shock at how good the food was and scarfed it all down, we walked across the road to get a bottle of wine and extra water for our hike the next day. We went back to the hotel, grabbed the warm, fuzzy blankets provided in our room, poured two glasses of wine, turned all of the lights out, and sat on our patio to watch shooting stars and look at the amazing array of constellations visible. It was incredible.