The girls and I recovered from our Volcano hike in the car ride back to Antigua, Guatemala. We had a full day planned post-hike, including a birthday party and dancing for one of Cass’s friends. We stopped at a local grocery store for party supplies once we got back to town. They had everything you could imagine there and it was packed with people. Once we finished gat the store, Isa (one of Cass’s Guatemalan friends who hiked with us) took us around town, through the main square, to the markets for shopping (which we did plenty of since the USA dollar is so strong in Guatemala), to an ice-cream store to get a mid-day snack, to a Guatemalan candy store to try out the local sweets, and then to her parent’s house to see what the house architecture in Antigua is like since 8 – 1o foot walls line the streets making house visibility impossible. Boy are the houses uniquely beautiful. Traditionally, there is a big, open garden in the center of the house. The rooms all surround the garden and the second story is a big patio with volcano views. Talk about a private paradise! The gardens as well-kept with beautiful flower and vine overhangs and lots of candles. 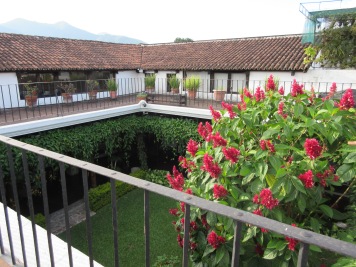 After that, we all piled into the Jeep and rode to the birthday’ girls house right on the outskirts of the city. When Cass told me we were going to be staying at her friend’s house and then her aunt’s house later on, I told her I would prefer a hotel with a bed, but boy was I wrong and glad Cass ignored me! We drove into the b-day girl’s house and wound up taking a drive up the mountain at the back of her property to their guest house. It had another amazing view of the city, nestled in the woods, and was our own little paradise! We had some very deserved and needed showers and got ready for the celebratory b-day dinner. We did a little pre-gaming in the main house and met loads of very nice people. I actually had mutual friends with some of the people I met as there is a large Guatemalan population at TCU – small world, huh?!

About 15 of us took off on foot to a rooftop bar and resultant for dinner. We had some delicious pizza and I tried very hard to stay awake. Sitting and eating after loads of travel and a long hike will make one very tired. Thankfully, we headed to an Irish pub called Riley’s that was not Irish in the slightest – more Spanish with cool murals and a huge dance floor with great Latin music – that brought the energy back. We had some drinks, danced, and people watched until the lights came on! It was only midnight but apparently cops with dogs were going to raid the bar! We left in a hurry and walked to a different club called Lucky Rabbit down the street that had a very “American, hostel-hopping, young tourist” vibe and more groovy music. I was getting tired and a little cranky, so thankfully, we left before the break of dawn and headed back to the guest house. Our “Core Four” of girls tried to walk back together but the guys in our group wouldn’t let us. Apparently, while the streets of Antigua seem safe, there is a lot of kidnapping all over Guatemala and girls should travel in groups of 6 of more, preferably with at least one guy.

Anyways Janine and Cass stayed at the main house to continue socializing while Kim, Isa, and I went to bed. I slept extremely well, with the startling exception of some loud screaming in the night as Janine and Cass discovered a clementine sized spider hanging in their bed when they got home. Those bugs in Guatemala are BIG!