Ryan couldn’t wait for today and our tour through Chianti wine country. His favorite wine’s of all are Chianti Classicos which are from the heart of the Chianti region in Tuscany and have black roosters on the label to signify that they are made with the right formula of Sangiovese grapes.

Our hotel didn’t include breakfast, so we walked to a little pastry shop to carbo-load on croissants and doughnuts before making our way to the train station to meet our Walkabout Florence tour group. Our tour guide, Lavi, was energetic and ready to go. She led us through the station and down to our smaller sized tour bus. There were about 15 people on our bus and it was the perfect size for a tour. Unlike some of our tours in Phuket, Thailand, we did not encounter any other tour groups during the rest of our day on this tour, making it very intimate and unique.

The drive to our first winery was about 50 minutes but it went by quickly as Lavi told us all about the history of Chianti wines. Apparently, in the days of the Romans, wine was terrible tasting. The Romans used any grapes they could find, didn’t prepare the wine well, and diluted it with 2 parts water. Because it tasted so bad, the Romans would add spices and other things to it to mask the taste and mainly drank wine for health reasons (it was safer than water in most cases). Over the years, people discovered that the way you grow the grapes, the size of the bunch, the altitude of the grapes, the soil, amount of skin used, and the aging process are all critical components to making a decent tasting wine. Harsher growing conditions and smaller grape yields typically give the best tasting wines. Not what you would typically think, right?

To grow a Chianti Classico, there are rules the govern all aspects of the wine making process so that the wine quality maintains the Classico standards. For example, the vines have to be planted close together so that they compete with one another for water and minerals. The wine makers do not water the plants so the vines have to drive their roots deep into the soil to find water. The vines have to be planted between a certain altitudes and on a slope because water is harder for them to get. Most importantly, all of the wines have to be at least 80% Sangiovese grapes. There are a slew of interesting rules that go into makings such amazing wines.

Our first winery was Villa Li Corti which sits on top of a hill on the 617 acre estate. We toured the vineyard and the olive groves before going inside to see the wine making process.

We took a tour of the barrel rooms…

And we got to see how olive oil is made. Apparently, “extra virgin” for olive oil means it came from the first press of the olives in the machine (below) after picking. Buyers be ware, the new and trendy “extra extra” virgin oil is just a marketing gimmick and the closest thing to “extra extra” would be eating raw olives. 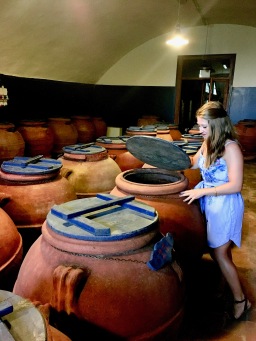 We went up to the tasting room and sat at a 4 top table with bread and meats for us to try. We started talking to the other couple across from us and learned that they also got married on September 16th as well and were also on their honeymoon! Small world. We had a good conversation about all things wedding, living in Brooklyn, and other miscellaneous topics while drinking some delicious wines and eating the meats. 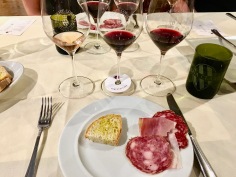 After tasting #1, it was off to our lunch location – La Cantinetta di Rignana. We bounced and swerved our way on the bus, deep into the heart of Tuscany, to this little restaurant in the middle of nowhere. It was just as special as the restaurant we went to in Hvar and apparently, it was so good that George Clooney and his wife went their twice in the same week! The view was amazing and we were treated to an insanely good meal. George has good taste in food…

Up first were 4 different types of bruschetta: tomato and olive oil, chicken liver, “lardo” which is cured ham fat (like on prosciutto), and mushroom. My favorite two were the lardo and chicken liver – sounds gross but it was so good! 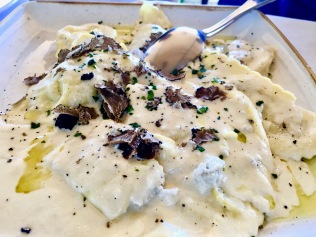 After that, we had two types of pasta: boar rigatoni and truffle ravioli. The shavings of truffle were huge and I am now addicted to everything truffle. It was family style so I had to share the ravioli, but I did not want to!

After lunch, Ryan and I walked through the vineyard and tried a grape that had fallen from the vine. IT was so good.

We hopped back on the bus and off to the third winery. The roads were very bumpy, windy, and narrow and we almost had some “too close to the edge of the cliff” moments… but we eventually made it to the Montemaggio estate. The manager gave us a tour of the vineyard and the gardens.

They were actually harvesting the grapes while we were there, so we got to see the grapes getting crushed and pushed into one of the big tanks. It was quite a treat to get to see all parts of the wine making process in action. 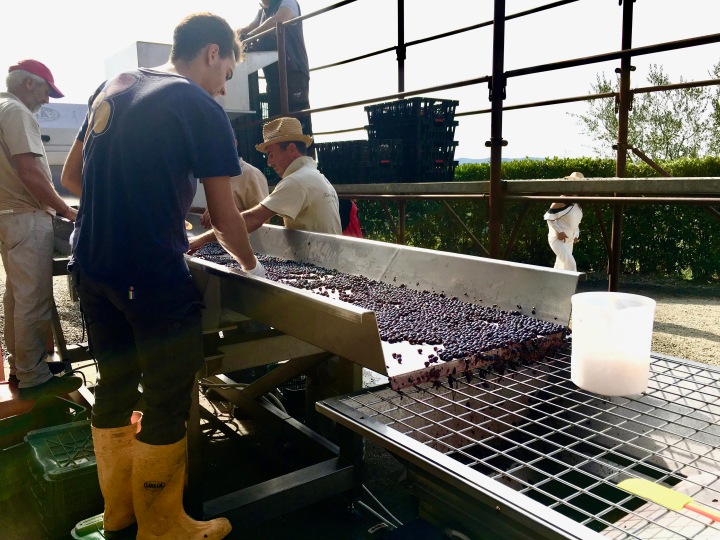 We were led through the villa and up to the tasting terrace. There were cheese pairings with our wine and we must have tried 6 different, delicious varieties. The lady next to me was making very strange, monotone noises while our host was speaking, and Ryan was imitating her in a way that almost made me lose my wine a few times. Between his silliness and the wine, we had a blast!

After the last wine, it was back on the bus and to a little square for some shopping. There was an amazing butchery there that smelt heavenly, so we bought some meat and cheese to take back to the States.

After about a 50 minute bus ride back, it was time to say goodbye to our tour group, drop the wine and goodies we bought back at the hotel, and walk over to Il Latini for dinner. Like the night before when we first stumbled upon the restaurant, there were 30 people already there waiting for the doors to open. At least there was a line this time, instead of a massive, unorganized crowd. Thankfully, we had reservations and went to the front of the line to get in pretty easily once the doors opened.

The place was family style so everyone sat close together and it was a very social setting. There was a pre-fixed menu for $55 euro a person, but we were not that hungry, so we ordered a few things off of the menu instead and stuck with the table wine that was only 10 euro a bottle. Little did we know, our “small order” got us enough food for 10 people.

We got the 3 salami plate and did not realize that the “selection of 3 pastas” was actually 3 full servings of various pasta dishes!

After that, was the massive steak and two different, complementary desserts. Thank gosh we did not go for the tasting menu! 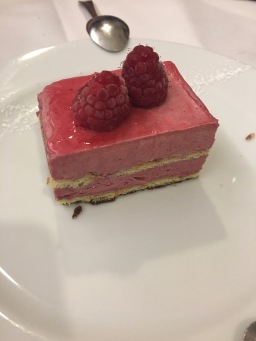 As it turns out, the couple next to us who did get the tasting menu didn’t get that much more food than us but they paid double! They got one additional entrée, but we were also given the same desert and a free bottle of desert wine! We started chatting with them about the sheer amount of food and what tasted the best. The couple was in town from California and were pretty fascinating. One was an artist and the other was in the energy business and we had a good convo about American politics for about 45 minutes until all of the wine finally disappeared. Overall, the dinner was very enjoyable and we would recommend Il Latini to anyone in Florence that is anywhere on the scale of very hungry to starving. You will get a delicious meal for a great price.

One thought on “Tuscany”