WINE TOUR DAY! Today marked our full wine day experience with Two Fat Blokes wine tours. We had a delicious breakfast at the Kirkton Hotel (that was included), went and checked out the smelly pigs in their barn, and got picked up for our tour promptly at 9:30 AM. Our super energetic guide, Julie, told us to keep our eyes out for kangaroos as we set out to pick up additional guests. It was only about 10 minutes into our drive to the next stop that we saw a bunch of them in the bush! It was so awesome to see them hopping around in the wild. 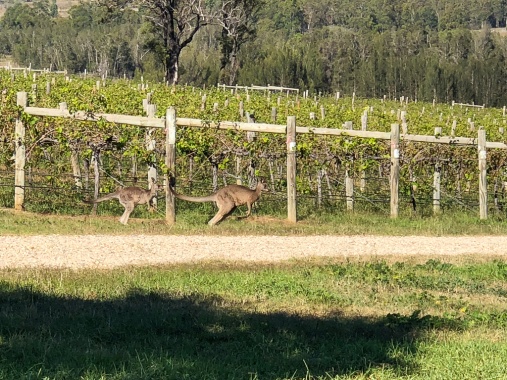 We picked up a total of 10 other people and were on our way to our first winery by 10 AM. Apparently we were a bit early so Julie took us to her “secret” kangaroo spot in a vineyard. We pulled up and there must have been about 100 of them all hanging out along the road! It was so cool to see – there were even some mums with their joeys!

After snapping a few pictures, we were back in the bus and off to Mistletoe Winery. The vineyard was very pretty and chockablock with beautiful sculptures in the yard and an art gallery inside. 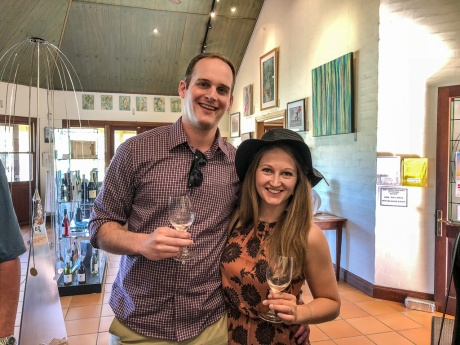 We all lined up at the bar and started our tasting. The lady leading that tasting told us to be aware that, if we drank all of the wine at all of the tastings we would be drinking 2-2.5 bottles of wine each! Not including the glass of wine included for lunch and 3 beers at the brewery stop at the end of the day! Geesh! I usually never waste wine but that knowledge made it easier to just taste some of the pours I didn’t prefer. (I am a light weight after all!)

Our second stop was the Two Fat Blokes wine and cheese shop to sample 9 cheeses with 9 wines! We were taken to this cute room in the back of the shop and had quite the spread. 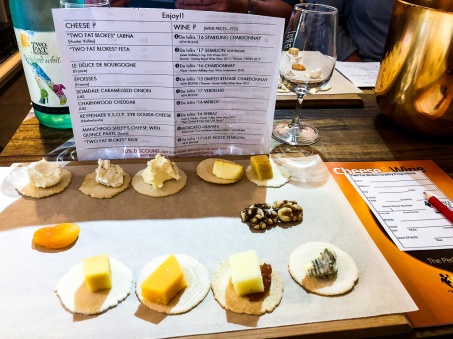 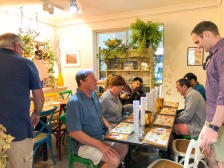 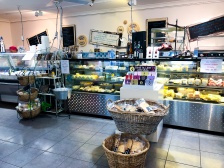 We were told to have a bite of the cheese to get the full flavor, sip the wine, and then have another bite of the cheese to see how that flavor changes with the wines influence. It was pretty substantial! I love cheese and wine so I was in truly a happy place! There was this feta with chives that was so to-die-for we bought some to share with my sister back in Sydney.

After we ate all of our cheese, we relaxed in the winery grounds for 15 minutes before heading to the next place for lunch. I was glad some hearty food was coming our way because I needed something to soak up all of the yummy wine (as you may start to tell from the photos moving forward)! 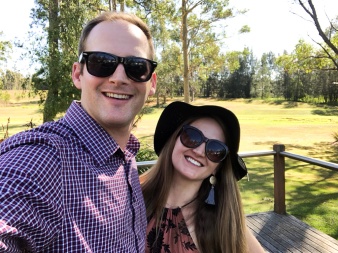 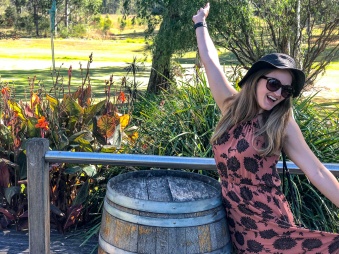 Our next stop was the Audrey Wilkinson winery. Julie told us that the wine makers used Audrey’s old photo as the logo for the winery and on all of the bottles. A few years in, an older local man came into the winery and asked why they used a photo of Audry’s brother as the main logo for the winery! Apparently, the wine makers didn’t realize the mistake but already had brand recognition and all of their marketing materials with the brother and not Audrey. To fix the problem, the took the photo of Audry’s head and photo shopped it on his brothers body to keep similar imagery. How crazy, right? 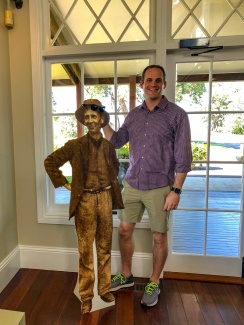 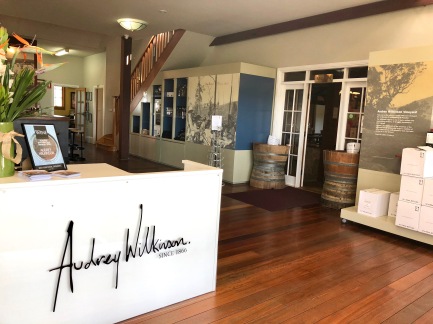 We had lunch on the veranda of the winery. Lunch was included with the tour and I assumed it was going to be something like our fabulous lunch on our Tuscany wine tour, but I was a bit wrong. We brought the lunch in coolers from the Two Fat Blokes restaurant and it consisted of pretty average cold meats, salad, and pasta salad. I was slightly disappointed but the rest of the day was so amazing that it did not bug me too much. 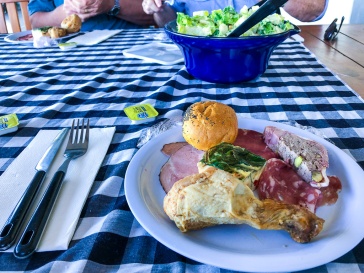 Lunch’s disappointment quickly evaporated as we went inside after we ate for yet another tasting! We started with a Semillon, a wine specific to the Hunter Valley that has strong notes of lemon and lime. The white wines at Audrey were a little to tart for my taste, so we did not buy any, but they were still decent. The best was the desert wine at the end. It was delicious and our host even gave me extra when I finished mine first and joked that I never got any to start with!

The view from the winery was beautiful and we had to snap a pic – even our guide Julie wanted to be included! 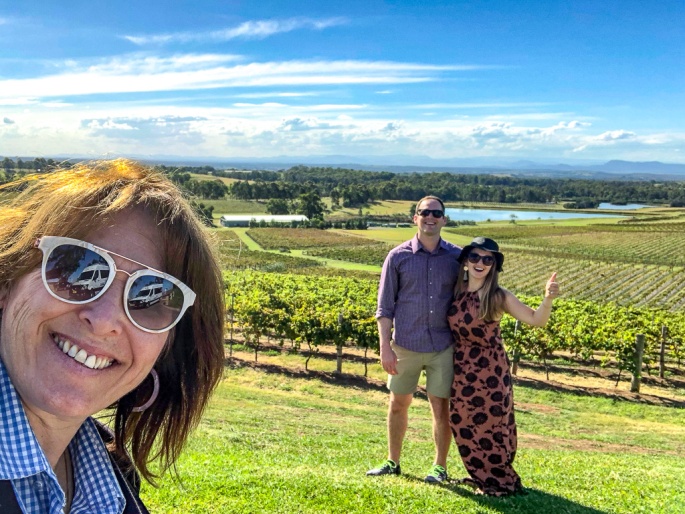 After another quick ride on the bus, we arrived at winery number 4, Ivanhoe. It also had amazing views and we sat on the porch tasting about 7 wines. Our host at this winery was very lively and apparently worked at Disney for several years so he could travel the world to the various parks. What a great way to see the world! 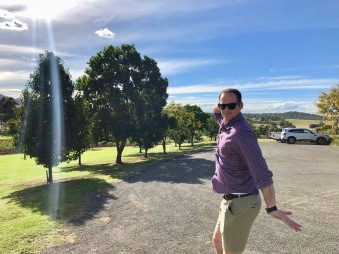 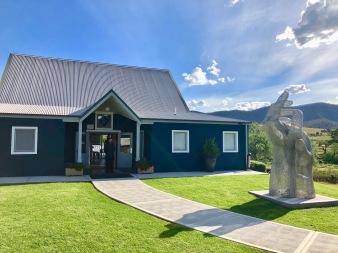 Our last winery for the day was one of my favorites because it included the chocolate pairing! We had 4 chocolates to taste with 7 different wines and they were soooo yummy (at least that is how I fuzzily remember it at this point). Ryan and I bought two bottles of wine and a few of the white chocolate coconut truffles to share with my sister. One of the bottles we bought had a picture that was supposed to be Marylin Monroe but she didn’t look anything like her.  She didn’t even have her signature mole! We still bought it though since, apparently on trips, we randomly buy things related to Marilyn like we did in Santa Fe!

We were getting very chummy and silly with the rest of our tour group by this point and the photo bombing continued at a hilarious pace! 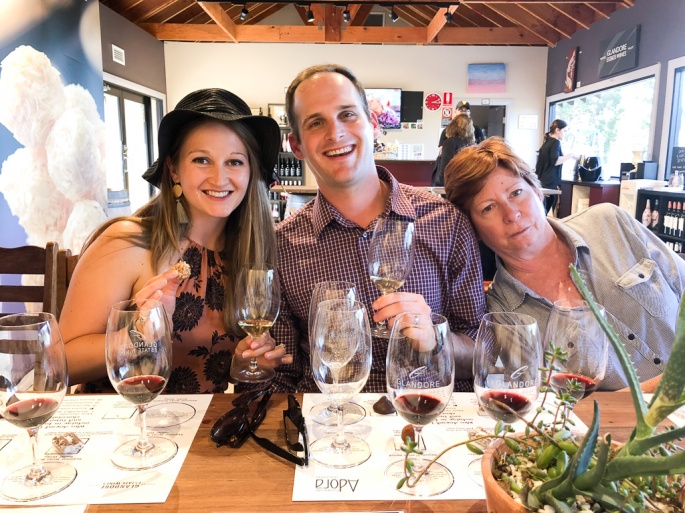 One last bus ride later we arrived at Hunter Valley Beer Co. – a micro brewery that only serves the surrounding area. The beer was pretty good and I know this because I usually don’t like beer and I LIKED the beer at HVB. We played some Aussie beer trivia (which I quickly lost at) and then got a tour of the beer making process. It was a nice way to end our big day.

Julie did a fabulous job of getting all of us safely back to our accommodation. One guy even drunkenly ran out of the bus at our hotel to go pee in a bush. That took us all by surprise!

Ryan and I had a 6:30 reservation for dinner at the hotel restaurant because we definitely we re not driving anywhere at that point. It was a set menu and we were already pretty full, so we decided to cancel our reso and get a pizza from the bar instead. We played pool while waiting and I did not get one single ball in! Of course, that had nothing to do with my skill and everything to do with the wine… right?!

Our dinner was served at the bar and my award-winning food photography skills really captured my bbq pork pizza…. 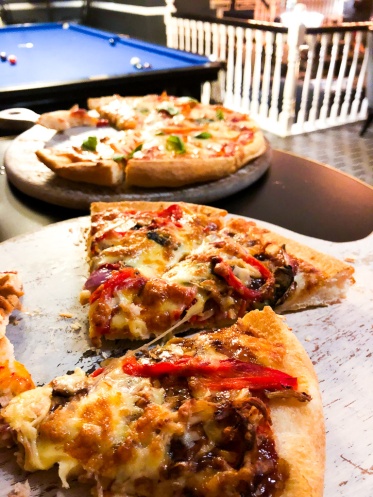 It truly was delicious though! After we filled up and I gave up trying to win at pool games, we relaxed on the patio of our room with another glass of wine before zonking out.