Another Tully’s breakfast morning in the books. We have loved eating all of the traditional Japanese food for lunch and dinner but it is kind of nice to have some more “Americanized” food in the mix too. After we loaded up on our regular toasted ham and egg sandwich, pancakes with a butter patty that looked like banana, coffee, and toffee almond cookie, we were off to start our day.

The plan for today was to see the Imperial Palace in the morning and then we would split off so my parents and sister could check out the Edo Museum (while it was open) and Ryan and I could see the Tsukiji Market and Harajuku areas. The train ride to get to the Imperial Palace was quite easy and we emerged from the station into this beautifully modern office building for Mitsui. Mitsui is a retail store that started selling Kimonos in the 1673. Before then, rich families would have the kimono makers come to their houses to make custom kimonos that were not very affordable. Mitsui opened the kimono market to be accessible for the everyday buyer but opening a department store for one-stop shopping and bulk creation.

We exited the Mitsui building to this massive park in the middle of a modern city. Sitting on 1.15 square kilometers and surrounded by trees, the Imperial Palace is almost impossible to see from the outside. The Place is only officially open 2 days a year and can only be seen by limited numbers in tours during the rest of the year. We did not have an official tour scheduled so we opted for the free version to go tour the East Garden. While we could not see the main palace, the gates, walls, and guard towers were pretty amazing to see. 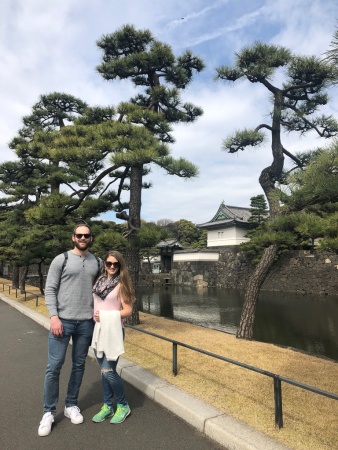 Apparently, the gardens used to be filled with houses and various buildings. The buildings were mainly made of paper and wood and had a tendency to burn down due to cooking fires. The buildings were always rebuild after time and time again of fires until the 1800’s when they decided not to continue the restoration. You can still see some guard houses and structures made from rock, but the rest of the view is mainly of the garden and cherry blossoms that started to pop while we were there. 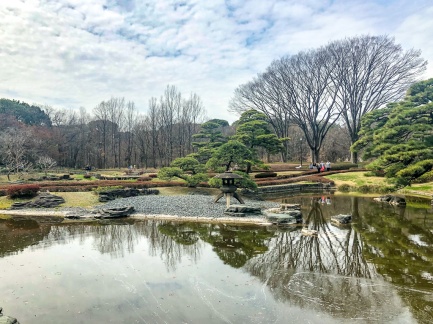 Ryan downloaded a tour app and talked us through the different points of interest while we wandered. We were there for about 1.5 hours before heading to Tokyo station to try and find Ramen Street for launch. The malls / shops / restaurants in the subway and train stations are insane. They are all clean and look just like any nice place you would go in the States, only they are underground at the station! We entered this long row filled with shops that had all kinds of cartoon characters and cherry blossom decantations adorning the store fronts. Eventually, we found the Ramen area and opted for one restaurant with a little smaller of a line. We ordered at the machine and were quickly sat at the bar area. Ryan and I both got versions of “dipping” noodles where you dip the noodles into the broth cup. It was insanely good and Ryan declared it was the best thing he has eaten in Japan so far hands down! While the slurping and noodle to chopstick experience was a bit messy, it was delicious.

After lunch, we agreed to meet back at the hotel once we were done with our activities and split off. Ryan and I excited the station and headed to the fish market. While the main part of the market that did the famous Tuna actions was closed, the outer ring of the market is still a highly recommended tourist spot filled with different vendors and food types. Along our walk, we saw a drip coffee place and decided to get some coffee for the long day ahead. While we sat, I Googled the market and, to our chagrin, it said the that market hours went until 2ish and it was already 1:30. With that in mind, the 20 minute walk definitely didn’t seem worth it. I was pretty disappointed but we decided to pivot to Harajuku instead.

The train station at Harajuku was packed. The main road for Harajuku, Takeshita Street, was also packed. It was a mob scene and the people-watching was amazing. There are so many people in Japan that wear brown trench coats and super thick (like 3-4 inches) platform shoes or boots. We also saw some traditional Harajuku outfits which were so weird (in a great way) and colorful. The shops were full with crazy colors, patterns, and kitchy cartoon animals. There were also crepe places that smelt amazing along with other weird food vendors like rainbow cheese sticks, fried potato unicorn horns, and 2 foot tall cotton candy rainbow pyramids. 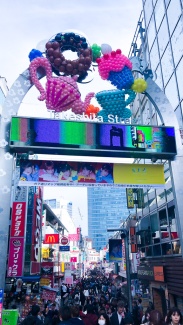 We ventured through this wild costume store and I wanted to buy pretty much everything inside. It was so cool!

We also happened upon a owl café and, to the recommendation of at least 4 people I’ve talked to, we went down the steps to check it out. It was about $10 a person to walk through this room lined with fake trees and cherry blossoms. Each turn took you to a different owl breed. They were chained up which was sad, but they were beautiful. There are animal cafes of all types in Japan. You can see everything from cats and puppies to hedgehogs, owls, capybaras, otters, and meerkats. While I would have loved to see more, I don’t feel great about supporting places like that financially since most of them  do not provide adequate environments for the animals. Buyer beware if you decide to go. 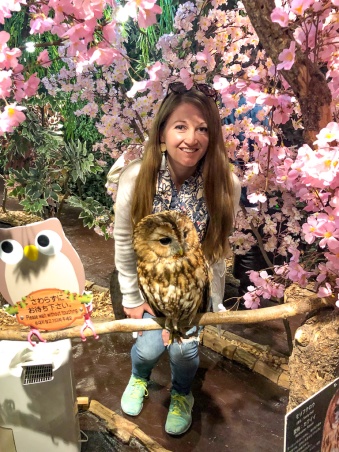 Once we dogged through the crowd to the end of Takeshita street, we decided to go find one of Harajuku’s weirdest cafes – the Monster Café. It was one the 4th floor of a high-rise and we were immediately excited about the strangeness to come when we were greeted by a giant moving eyeball at the front door. 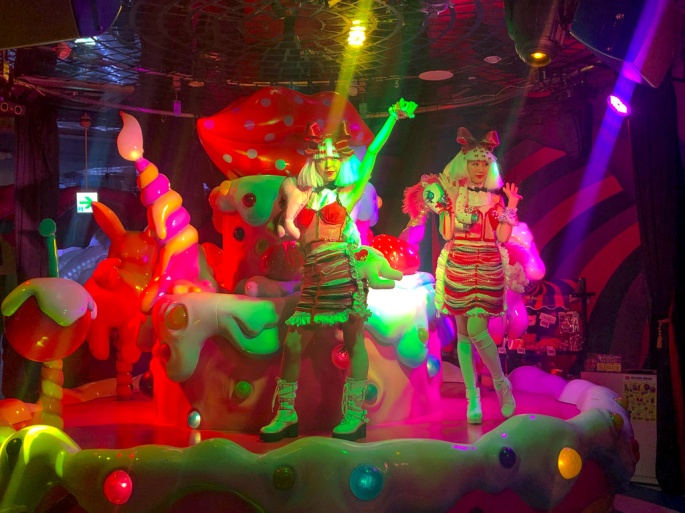 The waitstaff were dressed in doll-like costumes and we were lead past a cake-themed carousel, through the mushroom table forest, into the “milk bar” for our table. I got a strawberry milkshake and Ryan got this weird red and blue sugar mixture to put in his gin base. The milkshake was good but everything else we got was just pure sugar! Ryan got this cute Pikachu looking lemon tart and I got a bunny doughnut topped with a strawberry jam centered white cream ball. I couldn’t eat even close to all of it.

About half way through our time there, the lights shut off and all of a sudden a rave broke out by the cake carousel. This big purple monster started dancing with the waitresses and it was a mix of chaos and high pitched yelling. This was exactly the side of Japan we were looking for haha!

We left pretty quickly after that and couldn’t put into words how to describe the experience overall. About 5 minutes into the walk back to the train, Ryan realized he left his backpack at the table. We hurried back and it was right where we had left it. Phew! I have to say, Japan feels very safe and is so respectful. People don’t even use bike locks here for their bikes because people don’t steal them. It is a very trusting and nice environment to be a part of.

The trek back to the hotel was easy and it felt great to take our shoes off and relax for an hour. We met my parents back at the rooftop bar for another drink around 6. Ryan wasn’t too hungry so he opted to stay at the hotel while we went to find a place for dinner. My dad wanted Sukiyaki for dinner – kind of like a hot put but slightly different. My sister found a tiny place only a few blocks from the hotel. It had 3 tables and 3 private rooms and we were welcomed in by a English speaking owner. His father opened the restaurant 20 years ago and now this kind gentleman owns it. He sat us down, gave us an English menu, and walked through the options. There were two flights of courses and 3 grades of meat. Since I was already pretty full, we went for the smaller course option, the medium grade meat, and sake all around. The sake was much better than the $1 sake I had with sake bombs in college!

We all got a bowl with a cracked egg in it and were instructed to scramble the egg. Our waitress started to cook the food on the grill in front of us, using a chunk of pork fat as the grease for the pan. Boy did it make things flavorful!

She started cooking the meat with sugar, vinegar, and soy sauce, and, once browned, put it into our raw egg bowl. The egg was so fresh and added this intense flavor to the meat. I am not usually an egg gal, but this was eggsalent! (Excuse my pun haha). 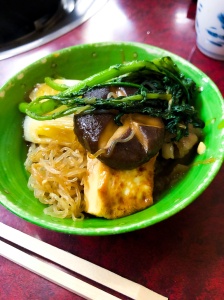 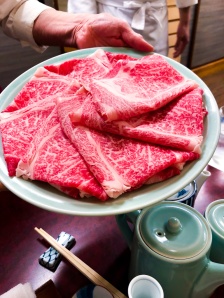 She then added the veggies to the pot and, once cooked, in they went to the egg mix. This meat then veggie pattern went on for like 4 courses and we were getting so full! It was all so delicious! After the final round of veggies, the cooked noodles for us as the last main dish. We were stuffed, but still had slight room for the cherry blossom ice cream and strawberries for desert. What an amazing meal!

We asked about the price on the menu when initially ordering to make sure it was a group and not individual. The owner confirmed the price but, we got lost in translation. What we thought was going to be a 4K Yen dinner ($40 USD) ended up being 37K Yen or roughly $340. OOPS! It was so worth it though.

We walked back to the hotel and told Ryan the story of our dinner. We were going to check out the Golden Gia district for bar hopping and drinks, but it was already 9 PM (on jet-lag time) and we had an early morning so we called it a night and fell quickly to sleep.

Continue on our journey through Japan…