6:30 AM wake up to meet our guides and head through the Sacred Valley to Machu Picchu! We hopped into our van with our guide, took a treacherous ride with crazy traffic through winding hills and, somehow, didn’t topple off one of the hairpin turns to our death. We were all very relieved when we made it to the various stops along the way!

Our first stop was at the Awana Kancha alpaca & llama farm to see the various types of indigenous animals. Apparently, there is a certain type of llama that gets so frightened when people approach, it is likely to have a heart attack and die! Talk about a poor fear reflex! 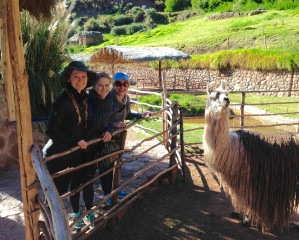 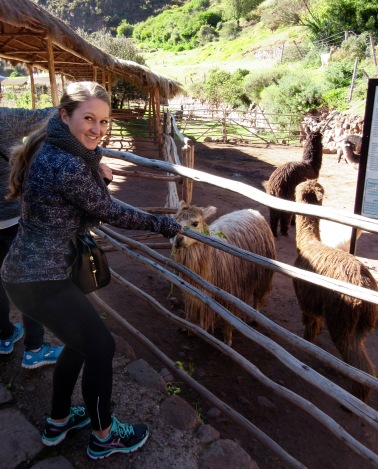 There were also native women weaving alpaca wool blankets and clothing in beautifully Peruvian patterns and, of course, all of their items were on sale in the gift shop at the end of our tour.

We then headed to a terraced, ancient city, atop mountains overlooking the Sacred Valley. The views from the city were astonishing and, though the air was thin, we were able to hike up to the top of the city. 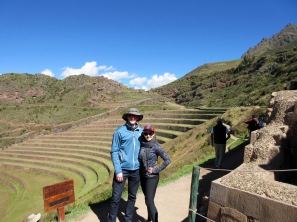 Thankfully, we arrived early in the morning and there were only a few other people hiking the city while we were there. As we were leaving, we passed masses of tourist buses and huge groups that were about to climb up. Our driver had quite a time getting back down the narrow road past the big  buses – literally only an inch or two between us on either side! For almost all tours, it is worth getting up early to beat the crowds.

Along the drive to the next spot, we saw tons of stray dogs, cows, pigs, and kids running in and out of the streets. There were huge fields of quinoa and tarps lining the side of the road with huge corn kernels laying out to dry.

We were getting hungry on our road trip, so we stopped at a market. There was a silver factory there with a huge fire pit at the back for making empanadas. The store had guinea pig empanadas which I was going to try, but there was a cage with baby and adult guinea pigs right next to the fire pit and we couldn’t bring ourselves to eat one. Instead, we had a delicious chicken empanadas and bought some jewelry in the store.

Our empanadas were not enough to hold us over, so we headed to the Tunupa Sacred Valley  restaurant. There was a beautiful garden entrance with parakeets and other exotic birds. Inside, it was so packed with people through the buffet lines. After we ate, my sister, Ryan, and I went into the back garden to explore and make friends with some testy lamas. They give us the stink eye but I think we got through to them eventually! 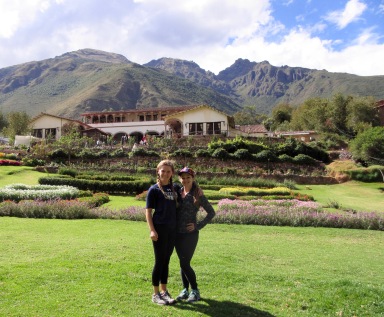 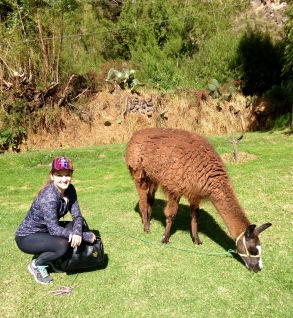 Once we were shopped out and our stomaches were fully, we took off to Ollantaytambo, the town home to the train station. The town was surrounded by amazing fortress ruins and a temple for Sun God worship. We walked up 210 large stone steps to the top of ruins where there were 40+ ton rocks used to make the buildings. The crazy thing is, the huge rocks up at the top of the ruins were actually mined from the mountain across the valley. The Inca would mine the boulders from the top of the other mountain, push the boulders so they toppled down the mountain, and then, somehow, lug them back up to the top of other mountains to build their buildings. All of that at an average male height of 5’2! 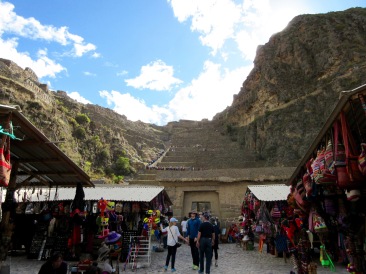 After admiring the view for about 30 minutes, we had to catch the train. Our guide dropped us off and we almost took off in the wrong direction. Thankfully, she ran after us and pointed us the right way. 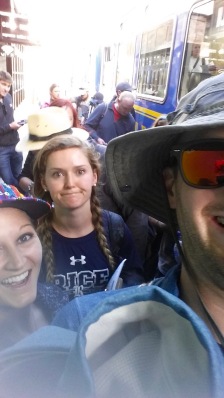 The views from the train were amazing, especially because there were windows from our seats to the ceiling and the over the ceiling, and it didn’t take long (1.5 hours) before we arrived at the Machupicchu Pueblo, the town below Machu Picchu!

Sometimes traveling isn’t about the big mountains you climb, trees you hug, or sand between your toes. Sometimes it’s just the laughter that comes from the little moments of joy… like when you have to keep your plotting 6 month old from trying to drink your “adult” Strawberry lemonade! She lunged for it & I had to tell her it was “mommy’s juice”. I’m in for a different kind of adventure with this one in tow!
When I was little & we visited Australia to see my family, we would always go to the forests to hike. Whenever we encountered a huge tree, my, dad, sister & I would measure how big it was by how many of us it took to hug the tree all the around!
While she is reeeaally tiny & hard to see in this picture, my little 6 mo munchkin, Harper, hiked all the way to Devil’s Bridge with us today. It was her 2nd hike ever after a test-run at Fay Canyon trail two days ago. She was such a trooper & just took it all in!
When you forget to check if there are diapers in the diaper bag and then realize mid-flight when you start to smell poop that, in fact, there are NO diapers in the diaper bag, you have to write about it and tell your cautionary tale! Somehow, we survived that first flight to Fort Lauderdale & the rest of the trip was awesome! Read about our first few days on the blog! ✈️💩🌴🏝
Guess who is back!? After a doctor ordered travel hiatus during 🤰& then 5 of the best months of my life with our new little nugget, Harper, I can finally say we are back on the travel train! We had 3 trips in 1.5 weeks, which taught us A LOT about traveling with a baby. So, hot of the press, is my new guide for planning trips with a baby. Everything you need to know about picking a destination, hotel, flying, packing, and even pumping, with a little one in tow. Hopefully this inspires you new mommas / dadas to get out there and show this big, amazing world to your little bundles of joy! Link in bio! 🌴☀️✈️
❄️☃️While this might look like Texas with all of the snow... it’s actually in Grand Teton National Park Wyoming- craziest part it, it’s colder in Dallas now that it was in this photo! Good thing I had my puffy jacket and poof hat to keep me warm! ❄️☃️