Waking up was easy in our airplane in Woodlyn Park! I was somewhat alert because, in the middle of the night, an animal was trying to get into our plane! It was rustling about outside and was probably a sheep but, after that, I was a light sleeper. My body was awake at 7 AM and our Waitomo Black Labyrinth cave spelunking tour was not until 10 AM.

We made toast for breakfast in our plane’s kitchen and got all packed up for the day ahead. We waited until the office was open at 8AM to drop our key off and the front desk guy assured us that we would have no issue hopping on an earlier cave tour. With that in mind, we drove over to the Black Water Rafting Co. check-in and were able to move up to the 9:30 tour. We hung out in the lobby and had some very expensively average coffee while we waited. WiFi has been pretty sparse in NZ so far so I took full advantage of that time waiting!

We were finally called out by our two guides for the 9:30 tour. There were ten of us on the tour and we had to get all suited up with very wet and cold gear before we could go to. Just to give you insight into how it felt, pretend like it is 45 degrees out and you are putting on very thick, wet socks, pants, and a jacket that are also like 40 degrees..and then add rain boots on top of that. We were looking gooood!

After a briefing, we headed out onto the bus to take us to the cave location. We all unloaded by a stream with a platform and the guide showed us how to jump backwards using our inner tube into the freezing water. We needed to practice outside so we could jump OVER WATERFALLS within the cave! So scary but awesome at the same time.

We took a trek down a path with our inner tubes and were at the cave head. There were rocks everywhere so figuring out footing was essential. There was no way I was going to twist an ankle before our big Tongariro hike! We got down into the cave and turned all of our headlights on. It was otherwise totally pitch black. The rock around us was so complex in shape and I was loving every minute of our walk through the water.

We got down to thigh level in the water and the rapid was so strong I almost took off at one point! We climbed up a rock platform and had to jump backwards with our butts in our tube out and down from a 7 foot waterfall. It was exhilarating!

After our waterfall jump, we lined up and grabbed the feet of the people behind us to form an “eel”. Little did I know, there were actually eels below us in the water…. But anyways, we turned all of our headlights off and looked up in the dark to see the absolute spectacle of the glowworms. They were everywhere and looked like blue constellations across the cave ceiling. All of the glow worms drop 20ish “fishing lines” that trap insects for the worms to eat. If you are ever in New Zealand, the Black Labyrinth tour is worth every penny and is a must do. You can kind-of see the glow worms in the photo below, but the quick flash camera does not do them justice at all!

We were in the cave for about 2 hours and eventually floated our way out. It was cold and slightly drizzly outside but who cares when you are already soaked? We sloshed our way back to the HQ and had hot showers ready and waiting for us, the only trick was trying to get out of our gear when our hands were still totally frozen! Talk about hilariously awkward undressing!

The hot shower was probably one of the best showers I’ve ever had in my life – it felt so good to defrost! After we got dressed, there were toasted bagels and tomato soup waiting for us in the lobby. The soup was soooo yummy and warmed us up even more. What an amazing start to the day!

When we were ready, we hopped back into the car and took off on our two-hour drive to Rotorua for our Maori cultural experience. The drive through the country side was beautiful (as usual in NZ!) and we pulled up to a beautiful Wai Ora Resort right on the lake. We got a tour of the resort and were really happy with the room and the view of the lake. We also had some time to kill so we grabbed a bottle of wine and hopped in the hot tub for some relaxing.

The shuttle picked us up for the Takami Maori Experience at 5 PM and we were transported to the check-in area. We waited for about 15 minutes until our driver, Mark, arrived with a much bigger bus. Mark had a bunch of personality and said hello to us in 59 languages! He named each country and had 4-5 versions of “hello” / catch-phrases from each country in its native language with a perfect accent. He was pretty impressive and it took him all 15 minutes to get to the Takami Maori village to get through it all!

Once we arrived, we had to pick a tribe chief from our tour group who then led us to the entrance of the village to greet the Takami chief. The Takami villagers came out in a boat from the river and performed the Haka in front of us 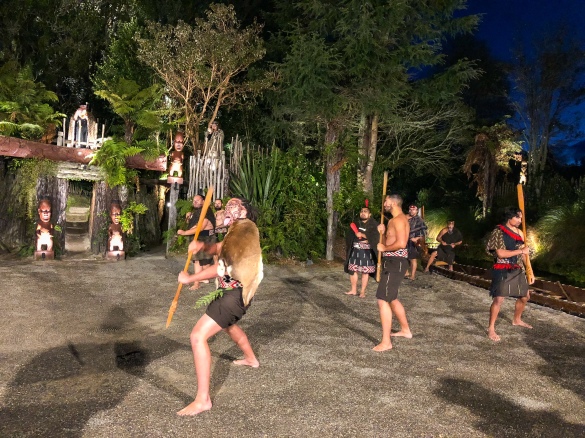 Then, each of our selected chiefs had to accept the offering from the Takami chief so we could enter the village. Once that process was over, we were invited in and led to 5 different stations throughout the village where we learned about the traditions, houses, Haka dance, face tattoos, and how the Maori came to New Zealand. It was pretty interesting and worth going to. 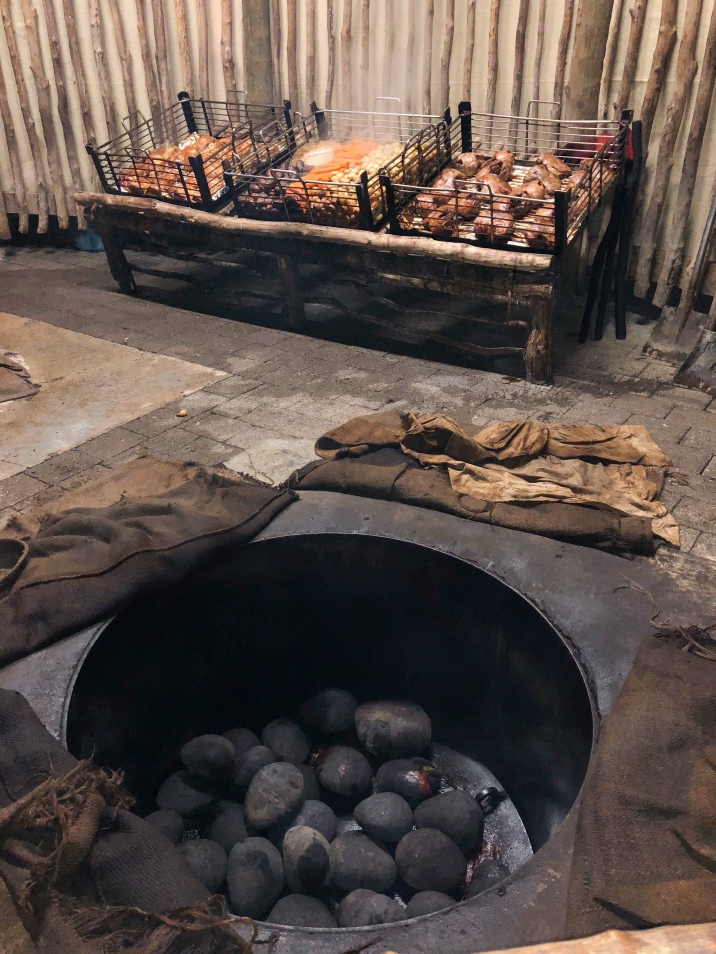 While they were preparing our food, we were taken to watch and listen to traditional Maori singing and dancing. The songs were very catchy and the performers were excellent. The singing and dancing, traditions, dress, and even people looked very similar to Hawaiian people and culture. Apparently, the Polynesian people (including the Maior) all came from the same island that was separated / destroyed by tectonic plates. The people ended up on multiple islands across the pacific, like Hawaii and New Guinea, so they all come from the same ancestry! I had no idea!

Once the dancing was over, it was time for dinner! There was so much food consisting of 3 types of potatoes, carrots, chicken, lamb, muscles, and bread. It was pretty tasty too! We sat across from another couple from Texas and chatted with them about traveling with kids for the duration of dinner. It is always nice getting to know people from other walks of life while traveling.

By this point, it was 9 PM and I was exhausted. As soon as we got back to the resort, I was in bed and asleep within minutes.

Thinking about going to Fredericksburg, Texas? For a romantic weekend, girls trip, or quick getaway, Fredericksburg is the perfect place to spend a long weekend or do a two-day trip! You may have heard that there are wineries and some good hiking there, but if you want help planning the specifics and some things to day dream about until your trip arrives, I’ve got some tips for you! 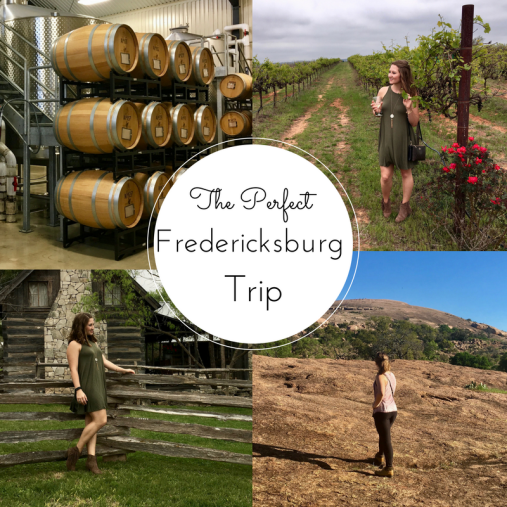 Read about our adventure at the wineries or Main street and Enchanted Rock to learn more!

While planning an adventure is the beginning of your journey and a very exciting peek into your travel possibilities, it can be stressful. The very first step of figuring out where to go can be a whole process in and of itself and then, once you have picked a place, you have to go through the daunting process of choosing flights, hotels, excursions, and booking everything… all of which can take a while. To save you time and some tension, I have put together some tips to make your travel planning process easier!

Step 1: Figuring out where to go!

There are two ways to book your trip. The first is to take the easy way and find a travel service that will book all of those things for you. The second is to book yourself. I will go through each option below as both have their pros and cons.

Overall, take a deep breath and relax! Your journey to your perfect trip within your budget and time frame is calling you and will be here before you know it! Don’t forget to check out my packing tips, road trip prep list, Alaska cruise guide and more to get additional ideas for your get-away.

It’s all about the climb, right?! ... (that & not falling!😂) Enjoying the journey (through cacti pricks, leg cramps, & all) was my mantra during the hike up Lost Pine Trail. The #Texas view from the top was pretty spectacular too.
Who said yo girl can’t handle a little mud? (It’s exfoliating right?!) Despite literally pulling my other half down the Rio Grande & falling hip deep into the mud, we couldn’t have had a better time #kayaking in #bigbendnationalpark ! Read all about it & our time in Marfa on the blog tomorrow!
180 feet below the surface have been any more surprisingly beautiful. #Arizona certainly has some hidden gems! Who knew sand could be so colorful. (Also glad we didn’t get stuck or flooded out!)
Welcoming my next trip (tomorrow!) with open arms! Off to #arizona for our annual #sistertrip 👯‍♀️... stay tuned for some more kayaking, canyons, & craziness!
Sometimes #art is a painting or a sculpture... and sometimes it’s like 20 massive concrete blocks in the middle-of-nowhere Texas! Marfa was definitely full of weird and cool surprises!
10 points for not falling off the cliff 🙌🙌 - Additional note to self, I need to hike more often! 🏔
Follow The Impatient Traveler on WordPress.com